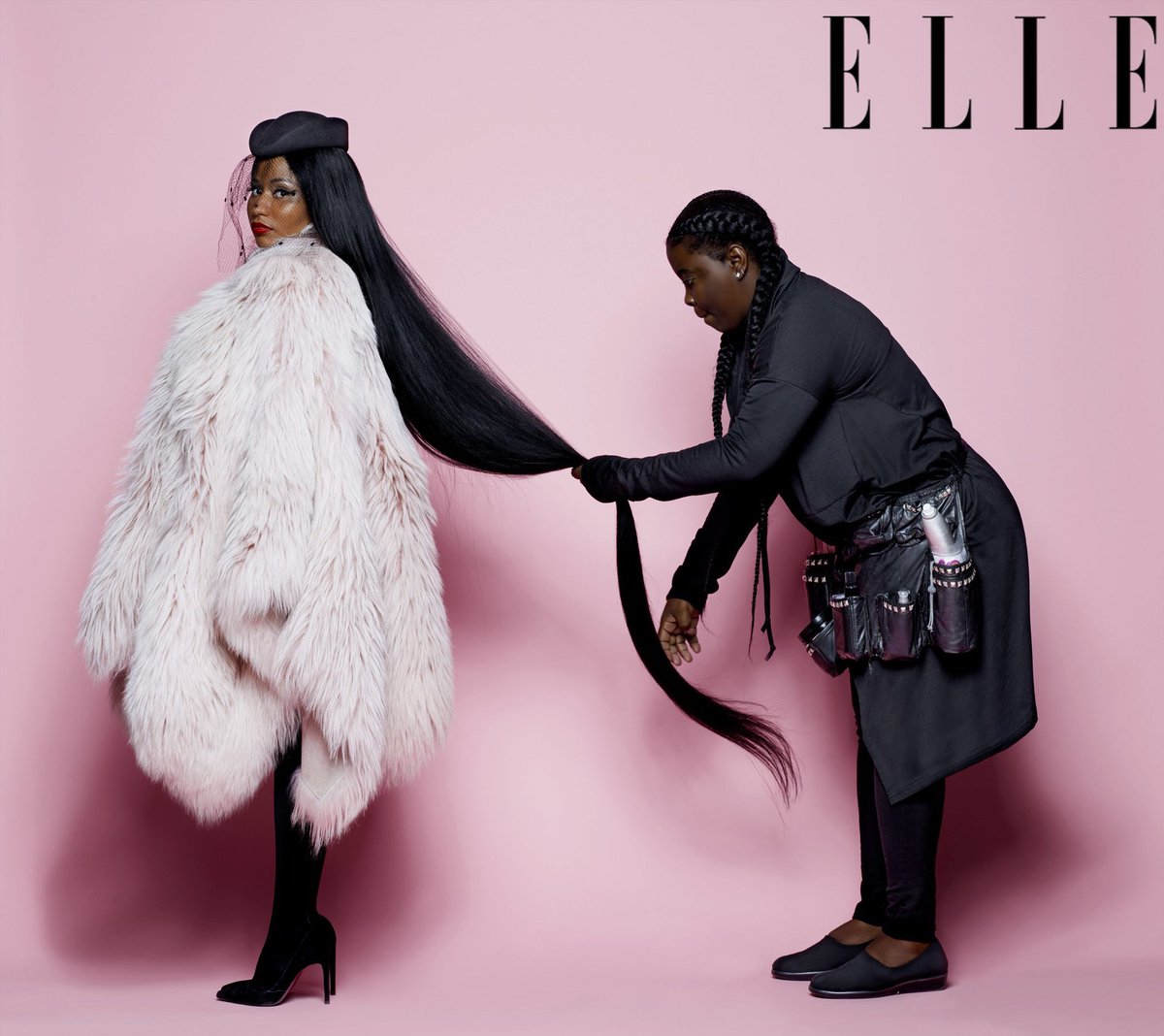 Nicki Minaj is one of those celebrities that makes headlines as a matter of course. She doesn’t have to do much. Thanks to her enhanced curves, racy rap lyrics and unsmiling, unapologetically sexual visage, just standing there in one of her over-the-top costumes is usually enough. Case in point, her recent shoot for Elle, which produced an image that had some crying colorism and others – including me – rolling their eyes.

I confess, when I saw the image of Minaj in an opulent white fur, her extremely long wig being groomed by another black woman, I didn’t see the problem. I had to read the Twitter thread to uncover the issue. When I did, I got it. But I don’t agree. At best, it’s a stretch. At worst, it’s that thing I hate, the immediate and completely unnecessary subjugation and denigration of a perfectly normal black woman minding her own damn business.

Myles E. Johnson, the author of the tweet that kicked things off, likely meant well. He probably looked at the image and immediately had a reaction, and as a writer covering this type of subject matter, it’s his job to call out questionable things. I get that. I support that. I do it every Friday.

But this time? Nah.

Johnson posted the image on social media with the caption: “this is a ridiculously and deeply irresponsible image.” When questions started he clarified that he thought it was a “white supremacist image.”

The responses were suitable. Here’s a good one:

“Your analysis is what is deeply irresponsible. You are mistakenly binding an openly Black woman to associations and accountability of negative cultural representations. The image itself is honorific of Kim Kimble, of Emmy award winning, Vogue, Vanity Fair, Essence, Bey fame.” – @RapAthene

I don’t want to be too hard on Johnson because I understand where he was coming from, but sometimes I think we can be too on guard for drama. Due to overexposure to a mélange of racist and gender biased material in the media, and in life in general, some Americans have become overly sensitized to racism and gender issues. Meaning, we see problems where there may not actually be ill intent. I watch for these things vigilantly, but I occasionally have to ask myself, is this a problem? Or, is this just unfortunate? Do I need to read somebody about this?

I mean, it’s impossible to guard against misinterpretation entirely. People are different. We have different life experiences, thus we will have different reactions to images. It’s why it’s so important that we think twice or even three times or more about the images we portray in editorial and digital content. But in this instance, even if someone had an inkling that the image with Kimble might be problematic, I think they would have published it anyway because the other possible subtext, which Johnson missed, was positive. Check out this tweet:

Both Minaj and Kimble were thrilled when Kimble got to stay in the shot in question. The ladies seemed to consider it an opportunity to join forces and celebrate their collective star power, and Minaj said that Lagerfeld himself insisted Kimble stay in the picture.

I thought that was notable since this is not the first time Lagerfeld has been associated with something dicey. The legendary fashion designer is certainly no stranger to controversy, but in this situation he appears to be blameless.

It’s sad that Kimble, a dark-skinned woman – with an estimated net worth of $1.5 million if the internet is to be believed – apparently can’t appear in a picture without somebody looking at her and immediately thinking she’s the maid.

To me, that is the real evidence of colorism here, but from the black side out not the other way around. Black people have long been victim to a perverted sense of better or worse based on the depth of color in our respective skins. Being what I like to call a comfortable shade of brown, at different times, I personally have been on both ends of the spectrum. Some people consider me dark, others not so much. Either way I got paid, know what I mean?

But here’s a thought. When we see a questionable image, and by that I mean one that gives you pause and makes you question what exactly it is you’re seeing, don’t automatically assume its negative. Let’s try and default to the positive.

I’m all for analysis and looking for hidden meanings. It’s necessary when you’re building a brand or when you’re protecting an established brand while advertising your product and/or service. Sometimes rooting out those hidden meanings and presenting them to those who may be unaware can be a precursor to various kinds of significant change.

But when you’re at Kim Kimble and Nicki Minaj status, few things in a creative environment where you are the star are outside of your control. Further, to assume that Minaj and Kimble, the unwitting heroines in this questionable circumstance, have been somehow snowed by racist or patriarchal forces outside their control, is it’s own kind of bias.

There’s a phrase I heard years ago that is perfect for this situation. I think I may have gotten it from a romance novel, but I can’t be sure. The phrase is roughly, “unasked for assistance is no more than interfering patronage.” Sadly, I think Johnson inadvertently strayed into that camp on this one.