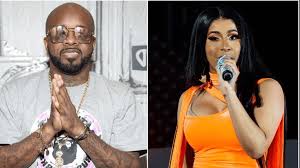 It always makes me shake my head when I hear industry elders share less than flattering opinions on what they see now. It’s often some combination of distaste, dismissal, or this rather milque toast smile and nod routine that is its own kind of insult. Oh, and let’s not forget the obligatory “back in my day” or “they don’t make ‘em like me anymore” references.

Take Jermaine Dupri, for instance. During a recent appearance on PEOPLE Now, he was asked what he thought about female rappers today. He immediately brought up Da Brat, the Chicago-bred rapper he mentored and produced back in the day. “Brat was the first female artist to go platinum, so we together broke the mold…”

Um, was that your response? Da Brat was a hit in the late 90s, early 2000s. So, you didn’t answer the question. He went on to say that before Da Brat, female rappers couldn’t sell a lot of records, blah blah blah, I almost tuned out, but I hung in there. Y’all know I can always sense a blog coming, and sure enough, when he was asked outright about the current queens of rap Cardi B, Nicki Minaj, etc., he wasn’t exactly complimentary.

“I feel they’re all rapping about the same thing…it’s like strippers rapping…” He went on to say that female rappers need to talk about other things than dancing in the club. Which isn’t offensive, per say, but it is dismissive and, to some degree, inaccurate.

Now, to clarify, I personally haven’t spent a dime to buy any female rappers’ music. I don’t know everything about their musical portfolios. I probably couldn’t name more than one or two songs at gun point, but I do like Cardi B, Nicki Minaj, and some of the other female rappers out. I’ll do the bop when their music comes on, I’ll even play their music deliberately at the gym, etc.

I’ve always had a soft spot for female rappers. I admire their candor. I find their vulgarity and fearlessness refreshing, even if I can only stand it in small doses. I like their feminine swagger, how they refuse to do what’s expected of them, and have made it to the top of a male dominated industry, talking shit all the way.

I understand where Dupri is coming from. He wants more. Maybe he wants a female Common, or a Queen Latifah a la UNITY, someone to rap about the issues of the day, and not be a foul mouthed sex kitten in a colored wig, swinging on an imaginary – or retired – stripper pole. But it’s like Cardi B said in her response– those kinds of female rappers are out there, people just don’t pay as much attention to them.

Sex sells, and being sexy is a key part of the rap game for women. It always has been. The most successful female rappers from Dupri’s era, Lil Kim, Foxy Brown and their ilk, were all hyper sexualized, and honestly, they were talking about the same things Cardi and Nicki talk about today – sans the internet and social media references – how to get the best clothes, cars and cash.

It’s not the most enlightening or inspiring content – and Dupri wasn’t asked about them – but honestly, are male rappers producing anything significantly better? No. For male rappers it’s also all about how to get clothes, cars and cash. Oh, and women, of course. But even though I too wish popular female rappers would break the mold and knock us back with something new, I still turned up my nose at Dupri’s attitude.

It was far too easy for him, someone with industry credibility – a long string of successful songs and artists – to dismiss what women in the industry are doing today. Don’t get me wrong, I’m not nominating Cardi B for any awards on female representation at its finest, but he couldn’t find anything redeeming about her or her work, or anyone else for that matter?

I think it hurt her too. Cardi’s young, and she’s shown a tendency to react from pique when attacked, whether directly or indirectly. But this is why young women – anyone, really – can’t always listen to their elders, not entirely. You have to build your self-esteem and confidence to the point where you can pick out the best of what anyone tells you, and leave the rest.

For instance, Dupri said rap about something more. Which could translate to, use your platform to call out important issues. That’s great. Here here, I say. Cardi B actually does that. One of the many reasons I admire her is because she doesn’t hesitate to ask her millions of Instagram fans provocative questions about politics, police brutality, etc.

But she can’t do that all the time – she’s a rapper. People don’t come to her for political strategy. They want to be entertained, and I think she balances her work as an entertainer with her a conscience as a woman and mother of color pretty well. At least compared to other high profile black entertainers who you never hear from when the fat hits the fire.

Don’t discount her just because she doesn’t shy away from her stripper roots. She was in fact a stripper. If she tries to ignore where she came from, someone, or millions of someones, will be very quick to remind her.

It was troubling to me that Dupri, like so many older men, got stuck on the sex bit and seems to have closed his eyes and ears to the rest. For example, one reason I like Cardi B is she advocates being financially savvy. As rich as she now is, she doesn’t hesitate to publicly say, I have a budget. Can you think of another high profile female celebrity who openly discusses something as basic – and as important – as a budget? I can’t, and she’s always been like that. I’ve been following her on social media since she was counting singles after working all night in the club.

Young people should listen to their elders. We should never miss out on the wealth of collected wisdom those who’ve walked similar paths have gathered through struggle, strife and success. But older people don’t always have all the information. Further, they don’t always have the right context.

My mother, God bless her stylish, overly opinionated, 79-year-old soul, does not understand the power of the Internet, for example. She does not fully understand the digital landscape, and to this day, she doesn’t really know exactly what I do. So, there’s a limit to what she can offer me in certain areas. And where her offerings stop, I have to pick up the mantle, think for myself, or seek out alternative resources.

Everyone can’t be your 360-degree savior. Nor can everyone be the exact right example or teacher. Not Jermaine Dupri, not Cardi B, or anyone else, whether they’re in the public eye or sitting in your living room.

We have to teach young people to think for themselves, to curate the best of what they need from every bit of information around them: pop culture, school, grandparents, mama, media, etc. By listening to yourself and learning how to discern what’s best for you, how to pick and choose what will improve your life or fulfill your needs, the need for someone else to fill a void you can fill yourself dies.